The time of union had passed. The wedding was at the firehouse, the celebration on the village green. There had been partying. Now all was quiet.

Legend had told of this time. Lady Sky would wed Lord Fire and bring light into the world. This was to be the first morning.

All eyes turned in the direction of the pointing child. The first light started to show above the distant horizon. Kinsfolk cheered. The union had been successful. Light had fallen on the world. Darkness would no longer reign alone. 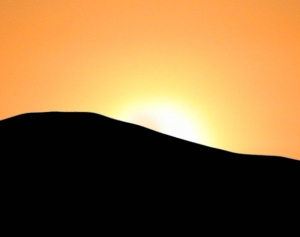